Above - Arya and Fallon dancing in the wildflowers!

Please click on each dog's picture to go to their own photo page! 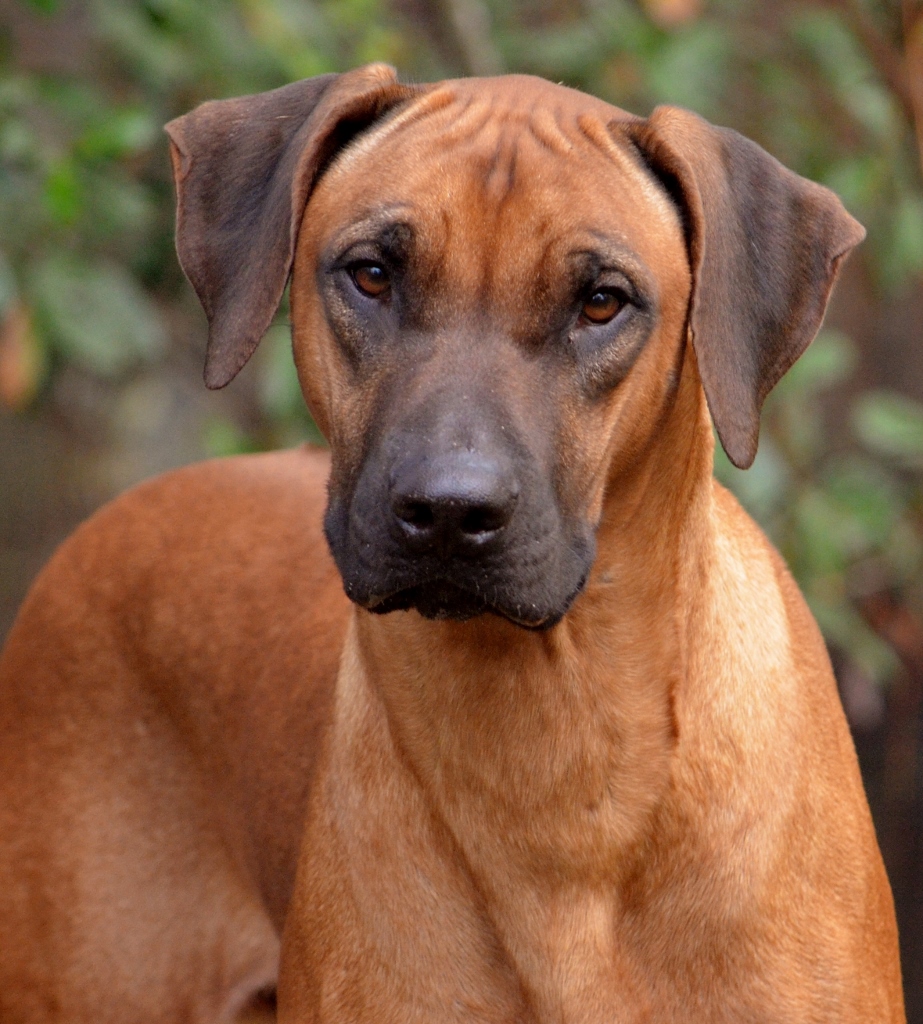 Bono joined our pack in July 2015 and quickly wormed his way into all of our hearts and is an excellent addition to our gang!   He is such a love muffin!!  He did what every other growing pup does here....quickly made for Strider to make friends and to have him to snuggle up to!  He has quickly adjusted to life on the farm and spends hours each day romping around with his buddies exploring and sadly, wreaking havoc on the gardens.  He began his show career at 7 mos. with a bang during Eukanuba week in December with 3 Reserves and 1 win in 4 shows!   He finished his Championship in style in June at 13 months of age and then went on to achieve his Grand Championship.  He finished his International Championship in October, winning Best In Show Bred By Exhibitor!  So thrilled for this young boy!! 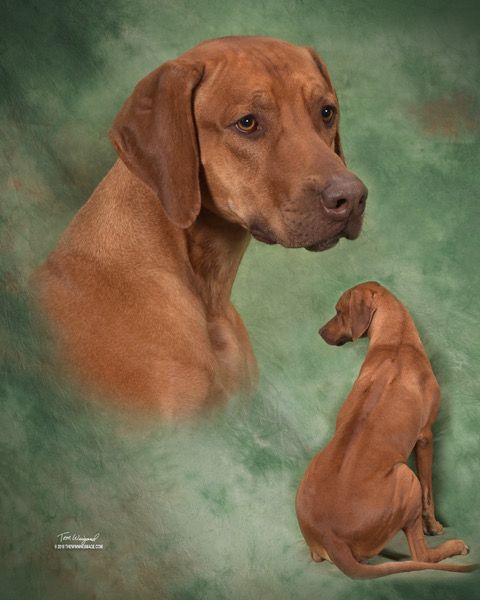 Oberon is our handsome LIVERNOSE boy...a TRUE lovernose!!! He is truly a hunka hunka burnin' love!  He decided early on that he wasn't leaving here, that this was his home for life...and so it was.  He's been a terrific pup - doesn't get into trouble, house trained easily, plays well with others...and is NOT a counter surfer.  Yet, anyways!!  Oberon started his show career in spring, 2017, and with limited showing earned his Championship in May 2018 and quickly went on to earn his Grand Champion title!  LOTS of adventures ahead with him!! 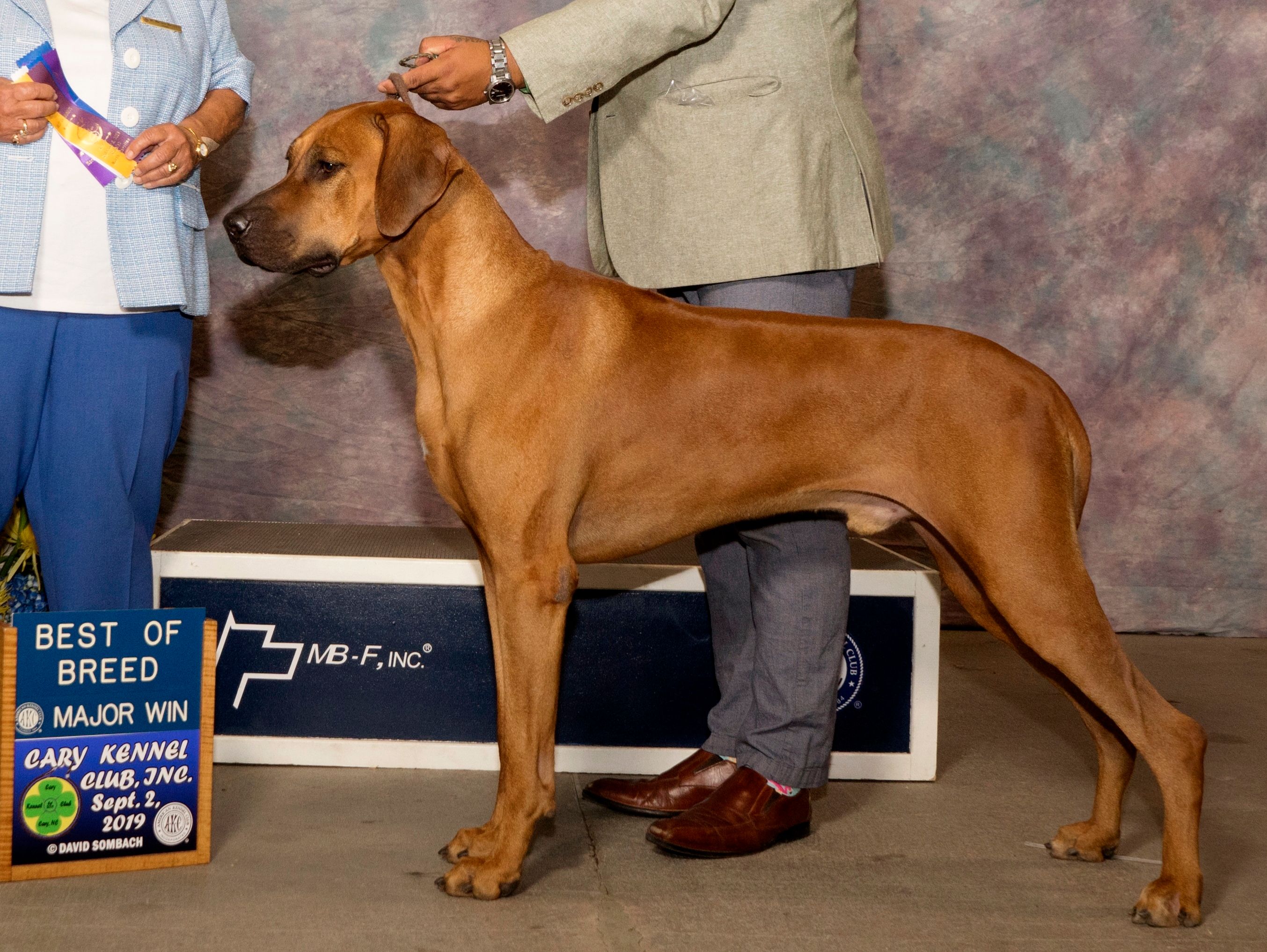 He is our sweet lovable big boy who is co-owned and loved by Doug and Jan Pope here in Florida.  Named after Doug's beloved helicopter that he  used to fly back in Vietnam, Huey has become his boon companion and support dog.  Doug finally agreed he could part with him long enough to show him and he hit the show ring with a BANG!  Finishing in just three weekends of shows, we couldn't be more thrilled!   He is a very affectionate, playful guy who makes himself right at home when visiting here on the farm. 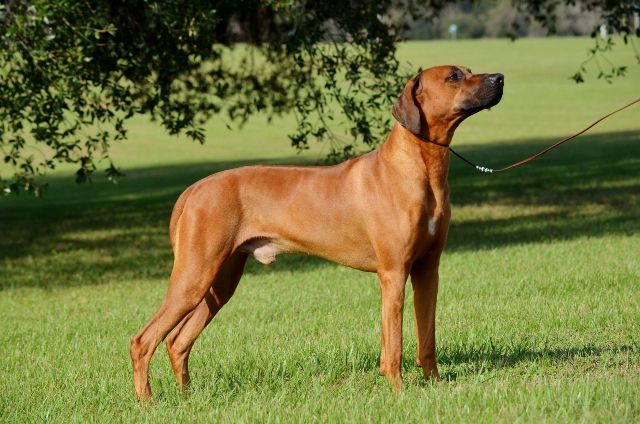 Finn is our newest Grand Champion, son of Arya and Legend, littermate to Reine Marie and loved and owned by Beth and Rick Nolan.  He is a gorgeous, dark red wheaten boy with the sweetest temperament!  He is smart and bright and loves nothing more than going out for his daily romps with his people and brother, Rip!  He finished his Championship easily, owner handled by Beth all the way!  On to Grand Champion after that, again, accomplished easily by Beth!  Very proud of their accomplishments and look forward to many more adventures!! 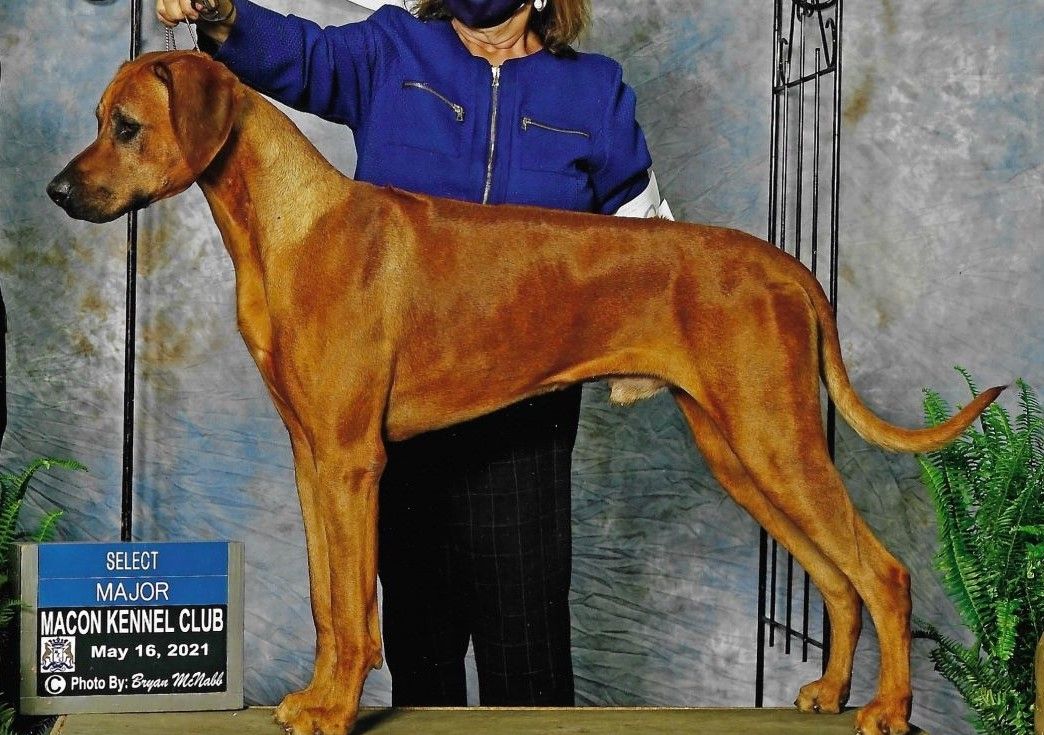 Denbe is our long awaited son of Charm and is totally living up to our expectations!  He's a big, beautiful, goofy youngster who loves farm life, happily playing in the pastures and pond with his buddies.  Never a dull moment with him!  His mother, Ariana, is Huey's littermate, so keeping it all in the family, so to speak!  He began his show career a little late due to Covid, but earned his International Champion title easy in November, and then in his 3rd time in the AKC ring at 13 months, he earned a 5 point major, pictured above.  He finished his Championship on March 7th with 4 major wins!   June 22, he's now earned his Grand Champion title, with 3 Best of Breed wins in a row in Tampa!  We're going to have a lot more fun with this boy over the upcoming months, for sure!! 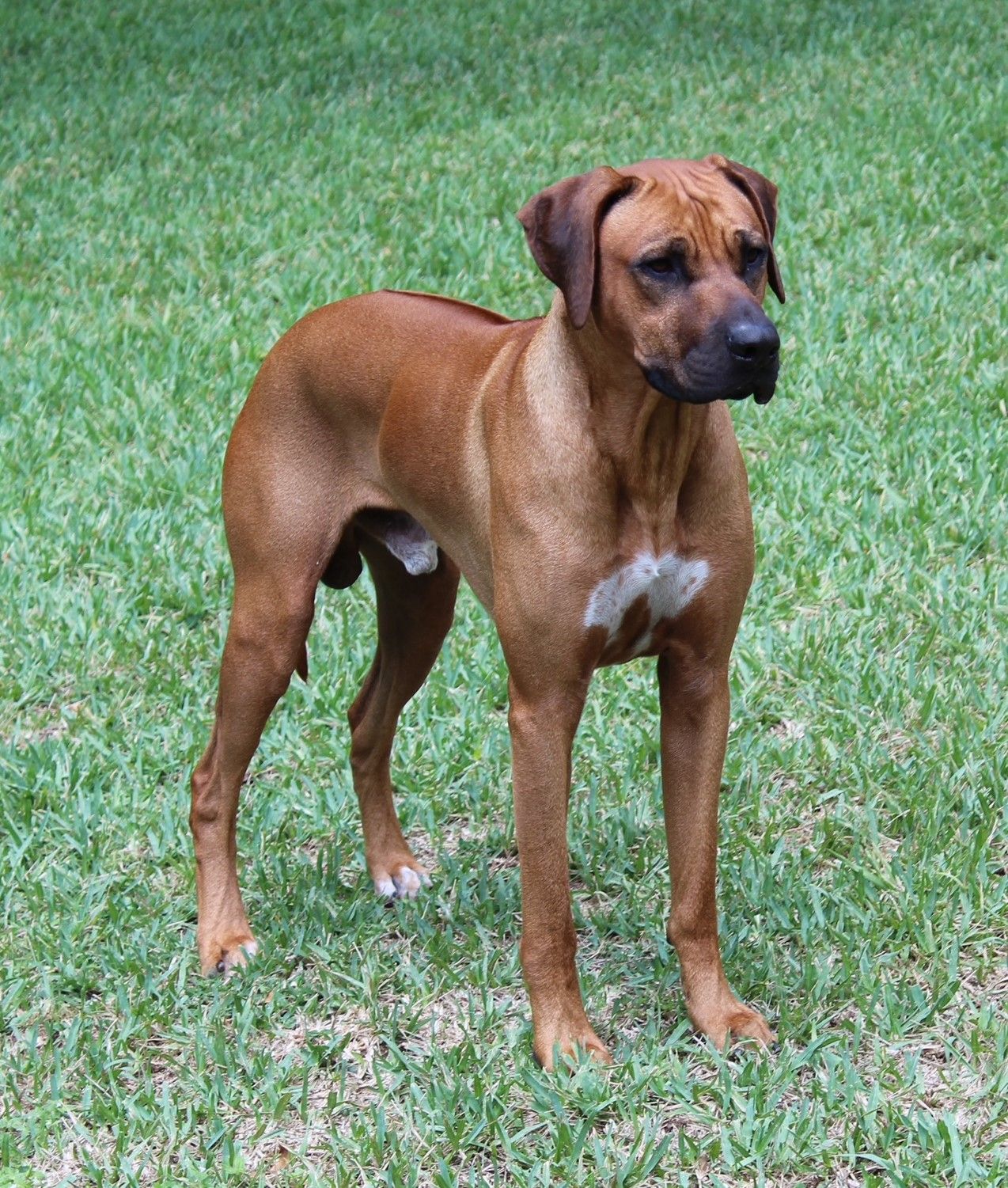 Rip is a handsome son of Bono who is owned and loved by Beth and Rick Nolan.  As with their boy, Finn, Rip has been owner handled all the way and is currently working towards his Grand Championship. 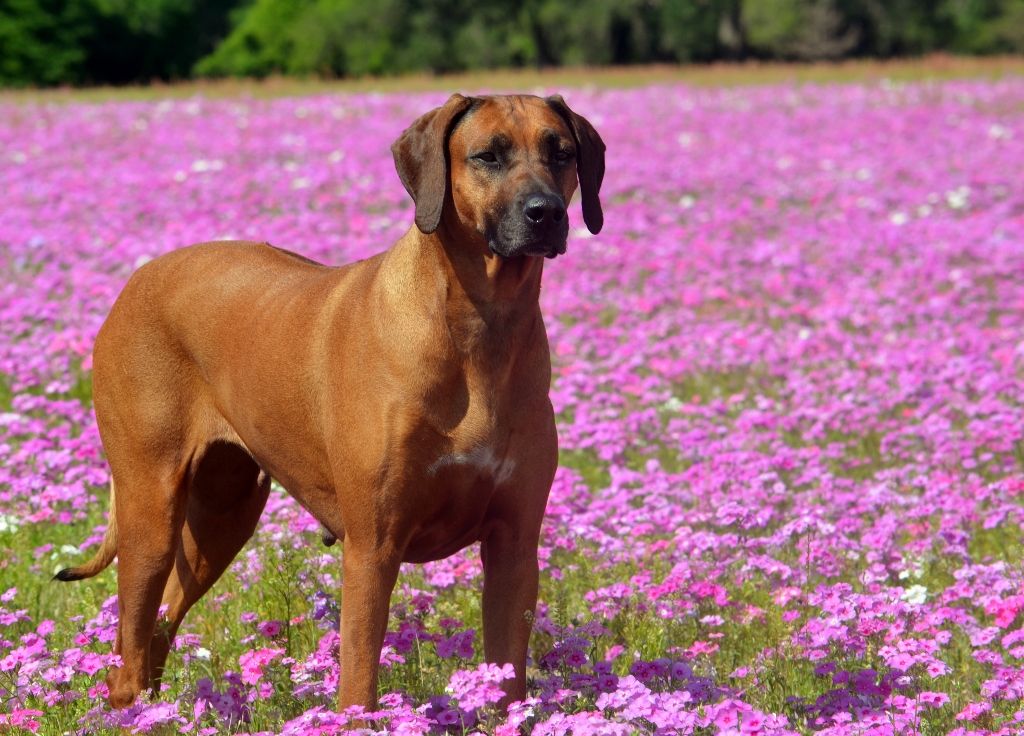 BABY GIRL!!!!!   Arya is the Queen here on the farm!  My heart and soul, moon and stars!  She is retired from breeding now, but her legacy continues with her pups - Oberon, Reine Marie and Fallon, and grandpups - Irie and Spring! 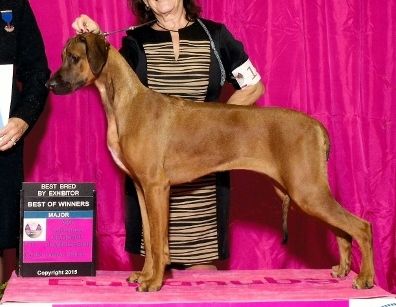 Duma is our little powerhouse from Tori & Jethro and is an amazing little girl!  In her first show, she won 3rd place in a very competitive class at our National Specialty show in September 2015. Her 2nd time in the ring, at our Regional Specialty in Orlando in December, she won Best of Opposite in Sweeps and was Reserve Winners to a 4 pt major.  She topped that off the next day, showing at the Eukanuba National Championship show and brought home her first win - a 4 point major, Best of Winners and Best Bred by Exhibitor!  I am beyond thrilled and in awe of this beautiful girl!  Like her mother, she is sassy, but sweet, obedient, but an instigator for causing trouble - let's NOT talk about my plants!!! and a beautiful, beautiful girl.  She was back in the ring in the Spring 2016, and quickly finished her championship in September 2016 with her 4th Major win.
Duma's Pedigree 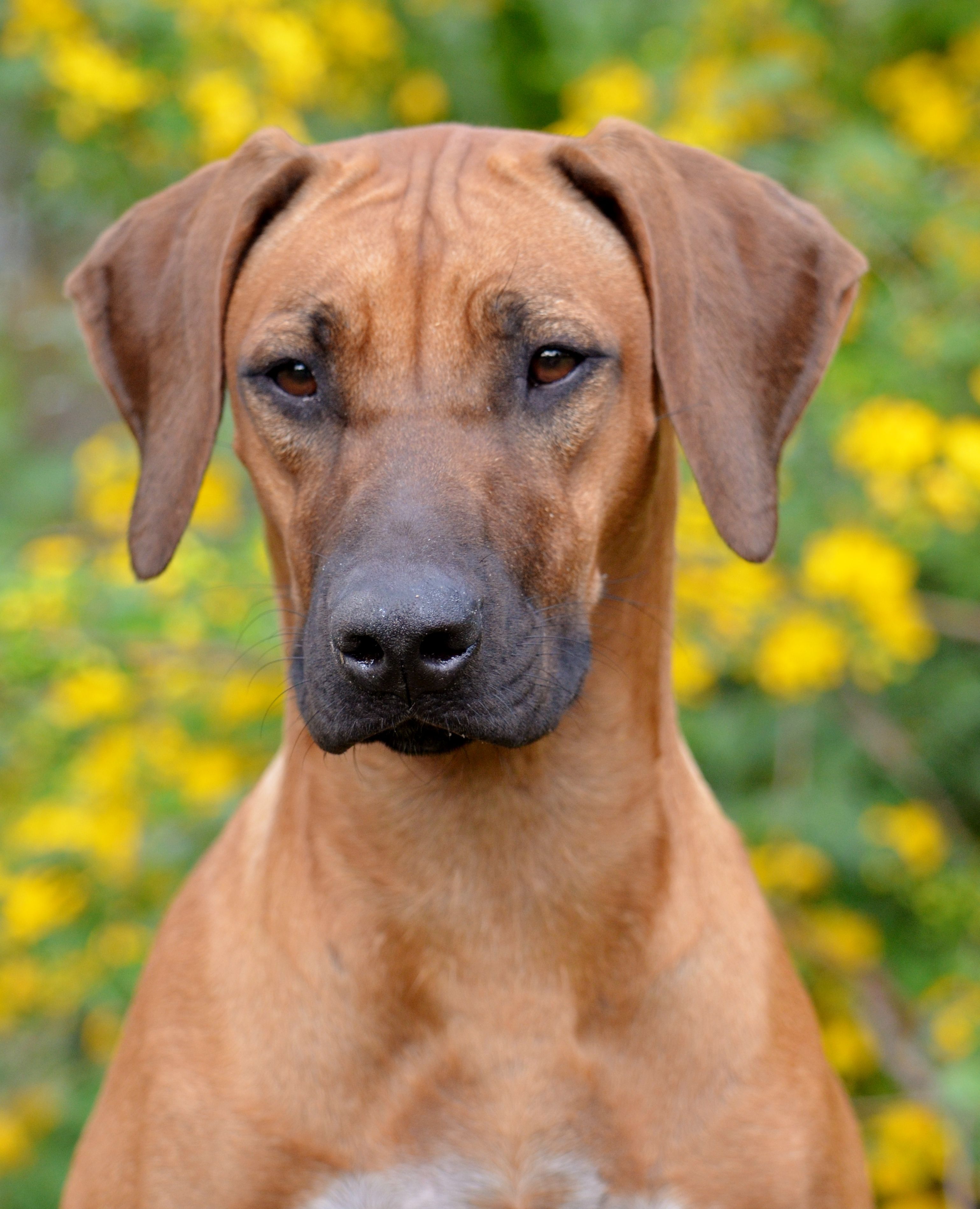 Reine Marie is our beautiful Legend/Arya daughter and is my joy!  She is a happy, happy soul who spends endless hours entertaining herself hunting lizards and moles all around the farm.  Endless hours!  There are a ton of holes to prove her ability in tracking those underground devils!  Unfortunately, some of my plants get in her way.  Deep sigh.  She and her buddies would much rather spend their days out romping thru the water and woods. Did I mention the endless hours of hunting?  Yes.  Endless!  Needless to say she is very fit!  Unfortunately this also affects her love of showing!  Which she HATES!  We gave it our best shot, but have decided to let her just be her happy self on the farm! C'est la vie!
Reine Marie's Pedigree
Reine Marie's Health Clearances  DM Normal, EOAD Normal
INT'L CH KENGALI'S STORMBORN, SECOND OF HER NAME  "KHALEESI'
dob 9/8/17
CH KENGALI'S UNBRIDLED CHARM x FC TERRA CHRISTA'S KHALEESI DRAGON BY KENGALI SC 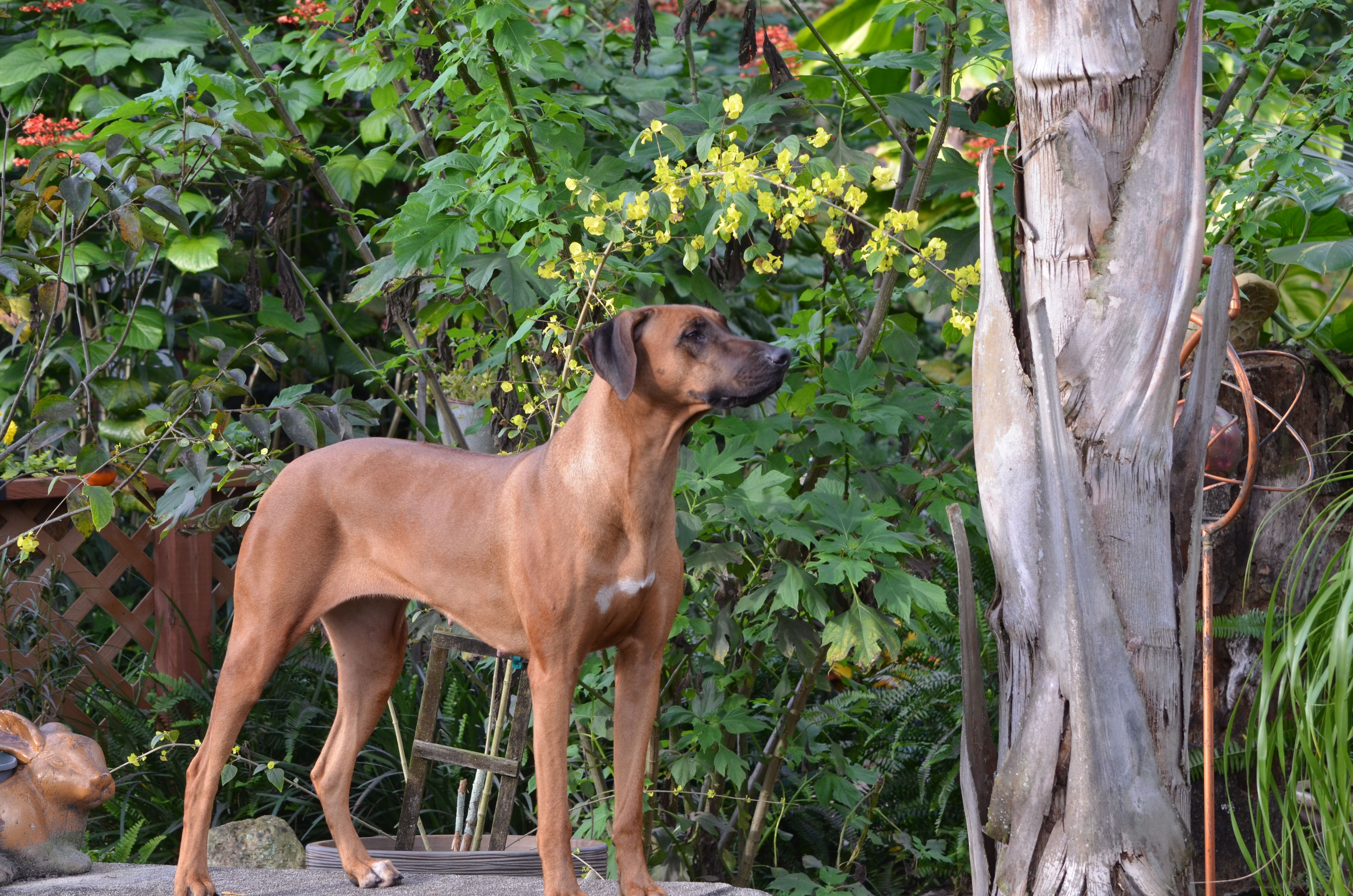 Khaleesi made her way into the world during Hurrican Irma, with all the drama entailed!  No power for 8 days.  No water...except for our flooded property!  It was a crazy few weeks here!  She and her littermates did well, tho, and thrived with a lot of TLC and help from friends!  She is the spitting image of her grandmorther, Jami, and has one of the sweetest souls imaginable!  I call her "my pet" as she is never far from my side and is snuggled in bed beside me every night!  She loves life on the farm, and much prefers that to the showring!  She is very happy to joing me on romps out in the forest nearby or chasing squirrels and lizards here at home.  Her trademark is laying on the couch on her back with one front leg stuck straight up in the air!  Quite a character!!!
Khaleesi's health clearances  DM
CH KENGALI'S THE POWER OF ONE   "FALLON"
dob 6/17/18
CH ILLIMANI'S KICKSTARTMYHEART FM x GCH AARIEL'S WINTER IS COMING TO KENGALI 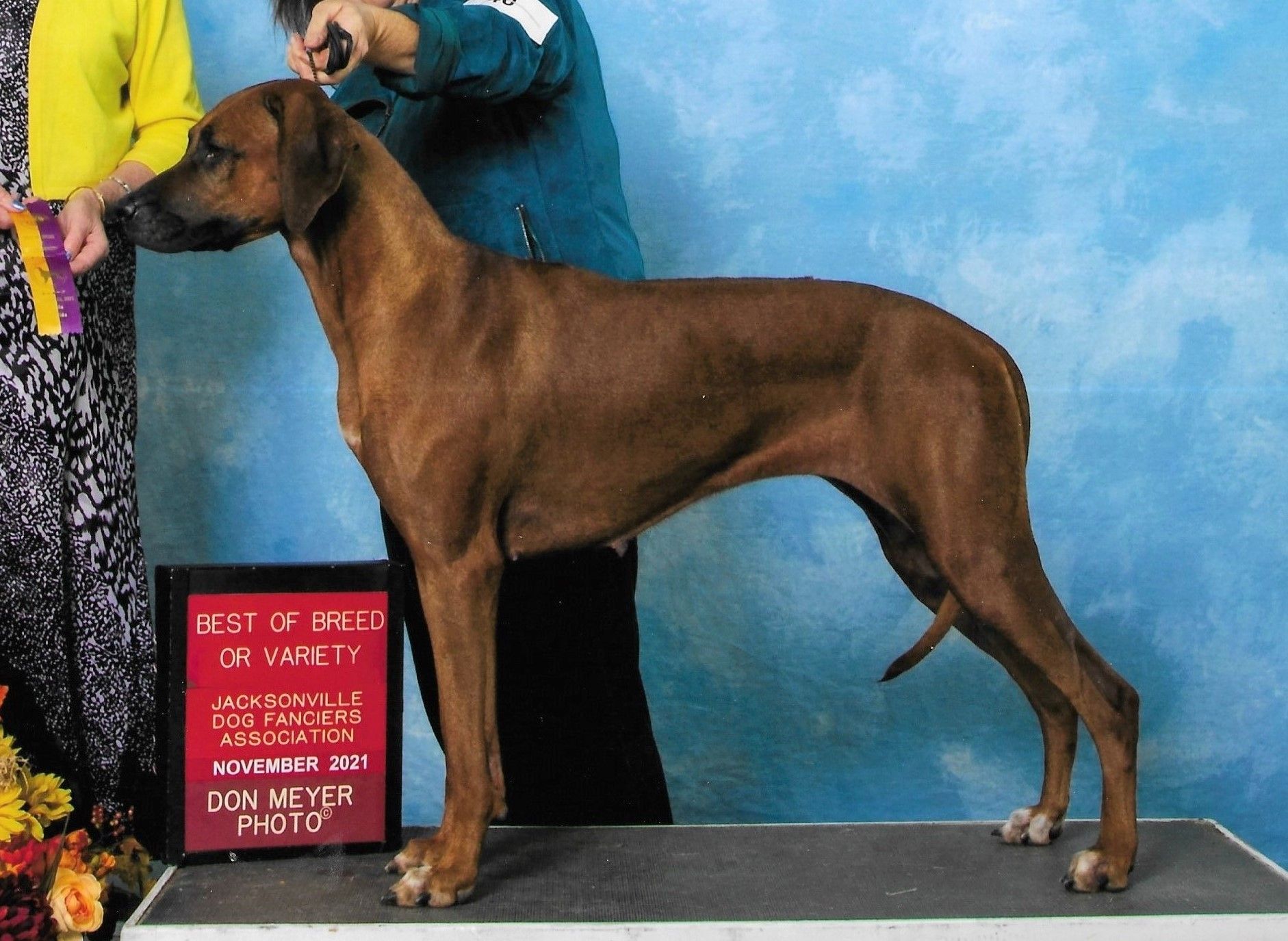 Fallon is another of our beautiful daughters of Arya who is an absolute joy to live with!  She has done well in the show ring, finishing her Championship with 3 majors and 3 singles!  Her sire, Cam, was the sire of our foundation bitch, Sachi, and thanks to frozen semen, we have him back and up front in our bloodlines.  While Fallon does enjoy the show scene, unlike her sister, Reine Marie, she is much happier snuggled up on the couch with me when she can!
Fallon's Pedigree
Fallon's Health Clearances  DM Normal,  EOAD Normal
GCH AARIEL'S DESTINED TO REIGN AT KENGALI  "SIBA"
DOB  12/21/19 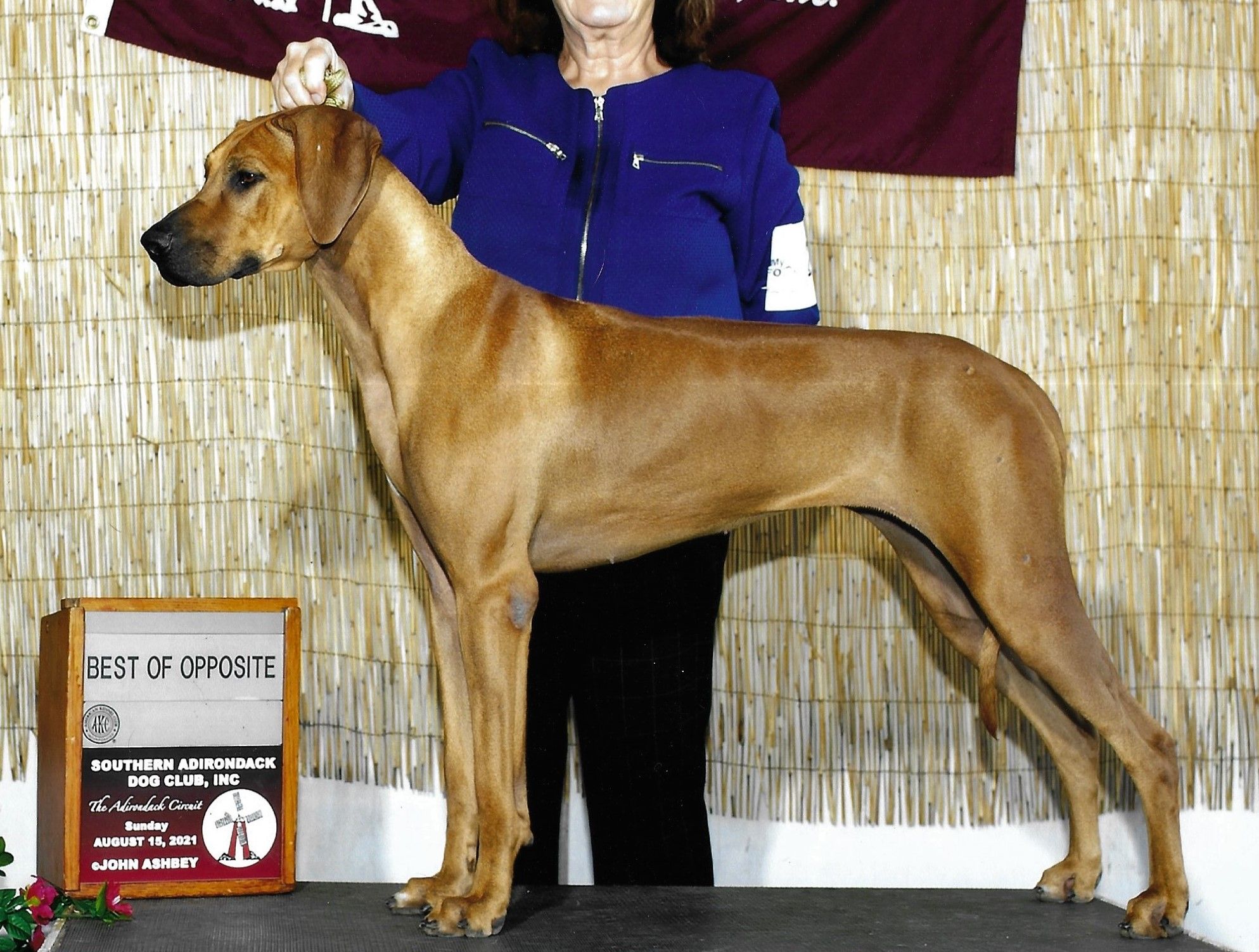 Siba was bred by my good friend, Carol Burridge, from Aariel Rhodesians.  While our Charm is her grandpa, she brings fresh bloodlines to our pack and we have high expectations for this beautiful girl!  She is a fun loving girl who loves to romp around the farm, getting into whatever mischief she can!  She and Denbe are inseparable and are never far apart!  She has also done well in the show ring and we are happy to announce she has completed her mission and can add Grand Champion to her name!
Siba's Health Clearances    DM Normal, EOAD Normal
Siba's Pedigree
CH KENGALI'S YOUMAKEMYTICKRQUIKR, TOO  "IRIE"
dob 5/1/19 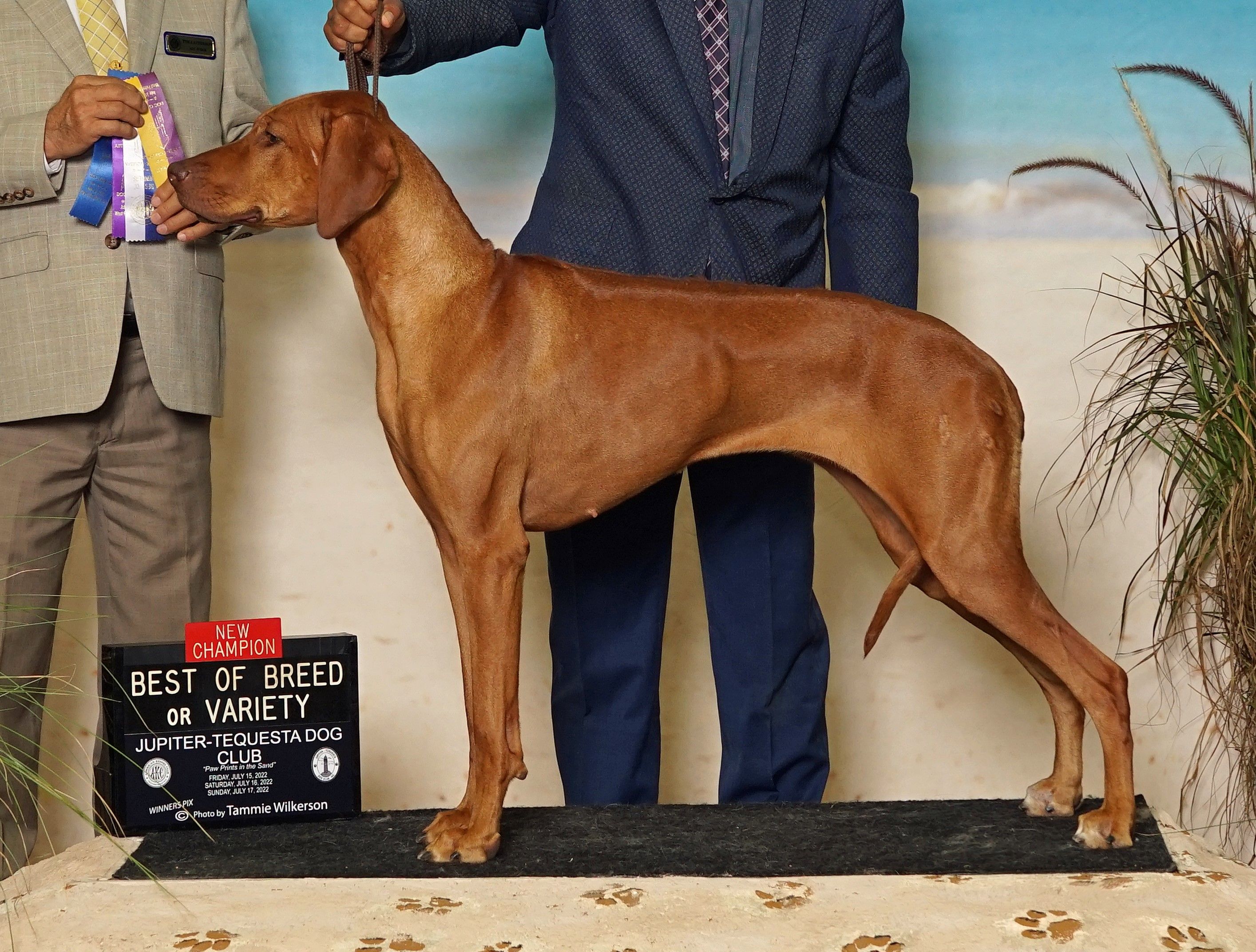 Irie is our gorgous red head from Ygritte and Oberon!  You won't find a sweeter soul anywhere!  She is a very typical livernose - needs a whole lotta love and attention!    She has the most beautiful amber colored eyes that can look right through you!  She is happiest here on the farm, just chillin' with the occasional mad dash to chase a squirrel!  Irie finished her championship with a BANG, winning BOB!  She's going to be so happy to just be a farm dog, sleeping in bed with us every night!
Irie's Health Clearances    DM Normal, EOAD Normal
Irie's Pedigree
CH KENGALI'S LIGHT OF THE JEDI  "MARA JADE"
dob  12/30/20
GCH KENGALI'S WINTER LEGEND X CH KENGALI'S ROGUE MYSTIC 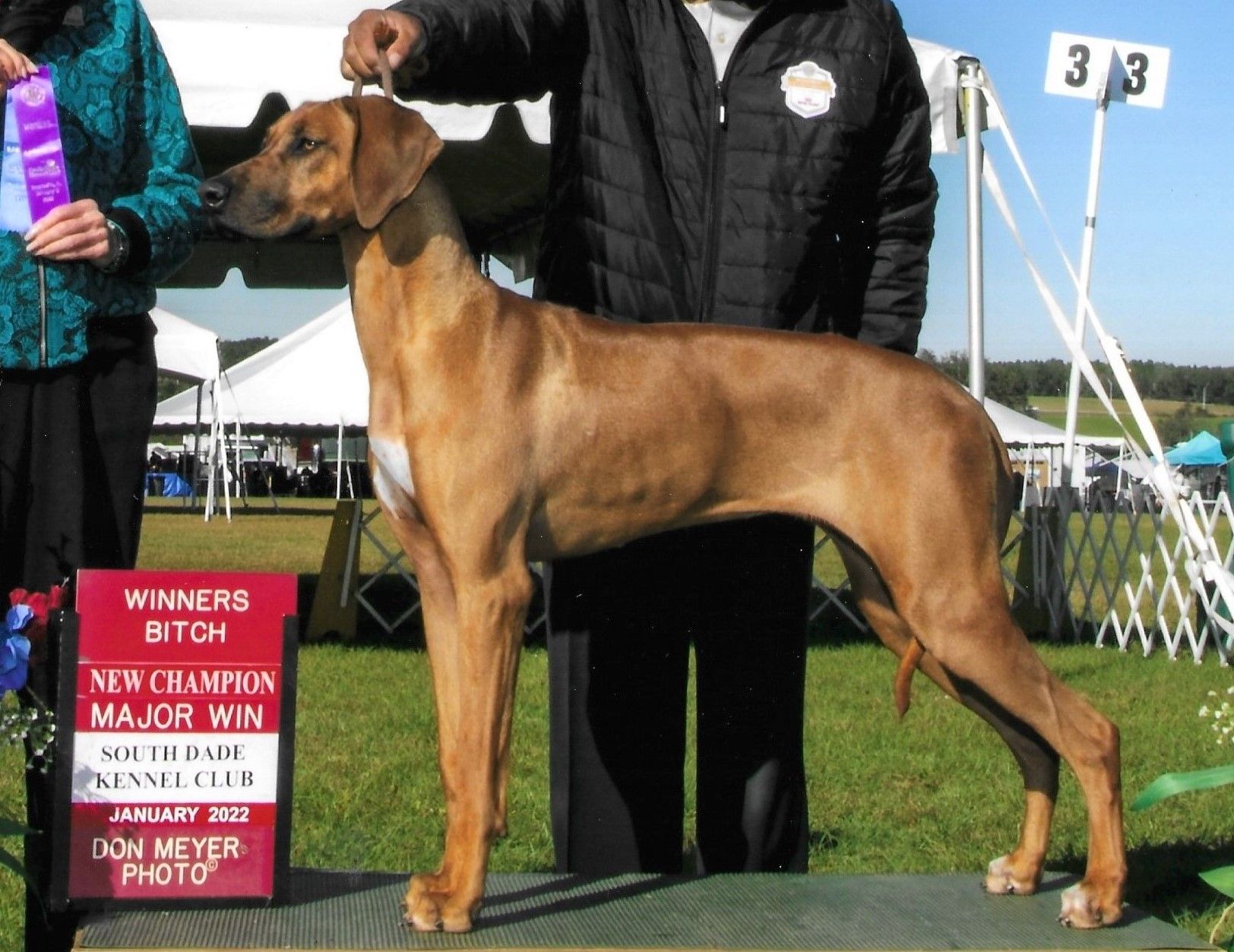 MaraJade is our lovely daughter of Finn and ShaKoon and is surely following in their footsteps!  She is a very JOYFUL pup who acts like she's had 4 shots of Espresso every morning!  Makes for a LOT of fun in the show ring!!  She is coming along great, tho, and won a 5 point major in her first win!  She finished her Championship easily on January 3rd in Brooksville, just a few days over a year old!  She truly enjoys her days here on the farm, racing around with her buddies, chasing birds, swimming in the pond and just being a REALLY!  GOOD!  DOG!!!  Looking forward to many more exciting adventures ahead!
Mara Jade's Pedigree
CH KENGALI'S A DREAM OF SPRING  "SPRING"
dob 2/9/21
CH KENGALI'S UNBRIDLED GUARDIAN X GCH KENGALI'S KISSED BY FIRE 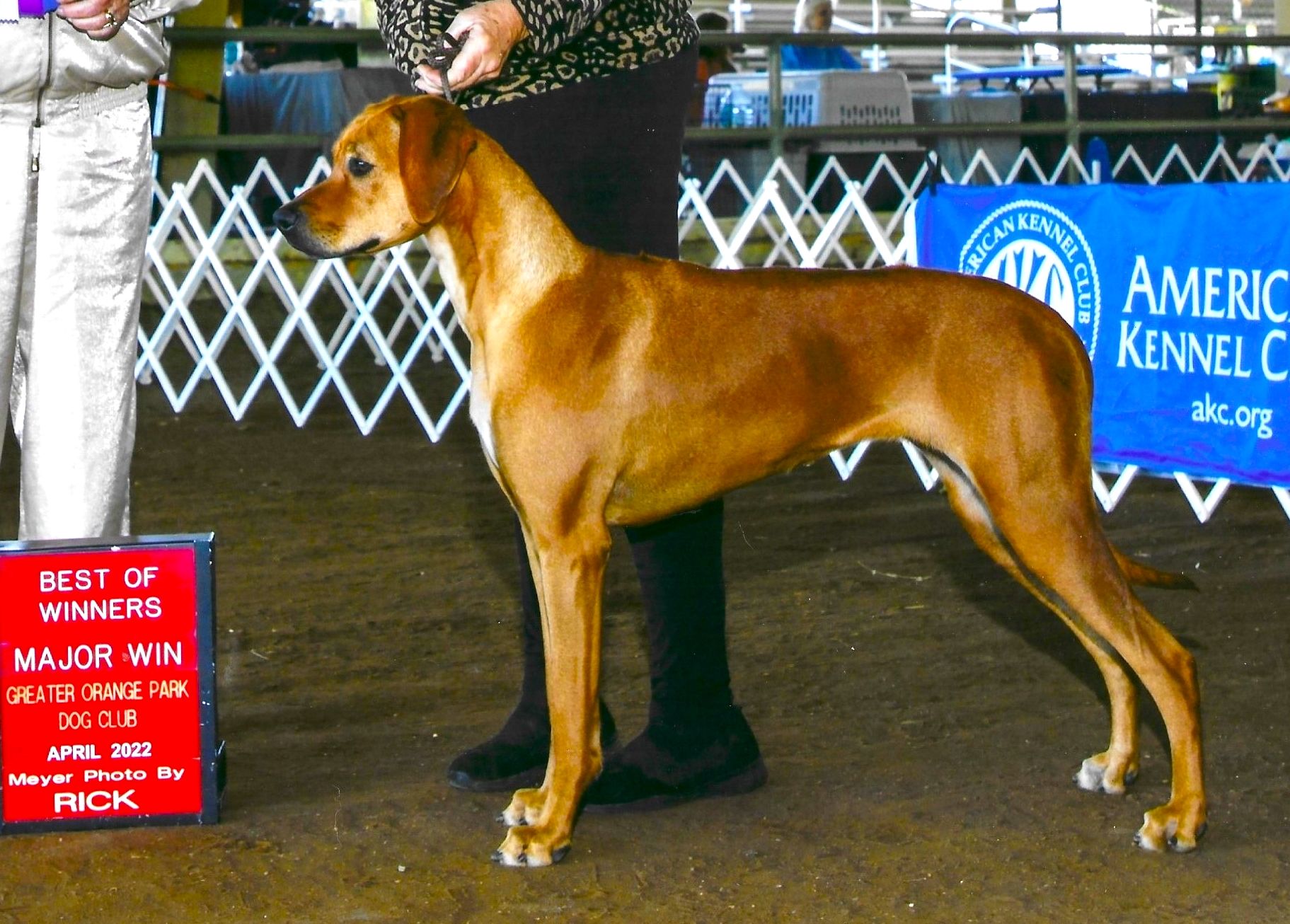 Spring is my "little grits"....beautiful daughter of Ygritte and Denbe.  She is such a happy girl...totally living up to her name SPRING!  The only thing is it's hard to keep her with all four feet on the ground when showing her!  She loves to SPRING around, jumping and leaping whereever she happens to be!  She is a JOY!  Great things lie ahead for her, without a doubt!!   SO thrilled to announce Spring earned her Championship on January 20th in Brooksville!